6 Things to Know About Doing Business in China

China is the second largest economy in the world, and the largest trading partner of most countries in Asia. In addition, it is the fastest growing consumer economy in the world. All this makes doing business in China very attractive. However, China is a complicated country, with many arcane rules and different business customs that can make it hard for outsiders to break in. Here are a few things that can affect your service supply chain while doing business in China.

Doing Business in China: The Positives

China is ranked 84th out of 189 countries by the World Bank Group, but many aspects of doing business in China are still extremely difficult. For several years, China’s economy grew at unprecedented rates. While growth has recently slowed, China is still one of the largest economies in the world with a vast appetite for goods and services. In fact, the forecast for China’s middle class is 600 million by 2020.

China has recognized that some of its policies made it unattractive for investors and entrepreneurs. As a result, since 2014, China has introduced four “Free Trade Zones” where approved companies can store inventory in bonded warehouses without paying duty and enabling online trading directly to Chinese consumers without an established presence in country. 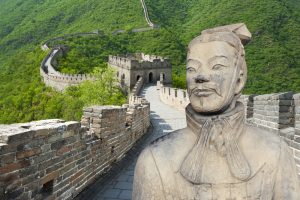 While the Free Trade Zones have opened up and simplified trade in many ways, they have not yet made doing business in China easy because of lingering infrastructure, taxation and regulation issues which vary by region.

The Chinese government has recognized that manufacturing is the basis for continuing economic prosperity, and they have made great strides in improving the manufacturing climate, particularly in aerospace, automotive life sciences and energy. However, Chinese manufacturing has not caught up with sustainable practices used in other parts of the world, and China continues to use more water and create more emissions than other manufacturing powers.

China has taken steps to change the ways in which industry operates in that country, including creating incentives for investment in environmentally friendly equipment and processes, energy-saving technologies and emissions controls. This focus on advanced manufacturing has created opportunities for companies to export this type of equipment to China. The lack of reliable infrastructure coupled with the distances between population centers in China means that setting up an independently managed, reliable service supply chain is still fraught with difficulty.

China has only recently opened its borders to trade with other countries, and there are still vestiges of its business customs that create challenges for companies hoping to generate profits doing business in China. Here are a few possible issues to watch out for.

China has been notorious for not respecting intellectual property rights, which can make it a challenge to protect proprietary or differentiating technology or to partner closely with Chinese companies.

Before doing business in China, it is imperative to register trademarks and patents. Trademarks are registered with the China Trademark Office. Patents are administered by SIPO, the Chinese State Intellectual Property Office. China grants trademark and patent rights on a “first to file” basis rather than a prior use basis, which means you can easily lose rights to your IP if someone beats you to registration.

In most parts of the world, business is conducted in a common language such as English, French or German. In China, although Mandarin is the official language, each district may have its own language. While sometimes considered dialects of Mandarin, these languages are almost entirely different and not easily intelligible. In addition to the Mandarin dialects, China also includes Cantonese, Hakka, Wu, Taiwanese and Shaghainese in various regions.

The tariff system is extremely complex and may vary not only by the type of goods but by the region. Knowing which “HS” code or tariff to assign can save on taxes, as can knowing which products are exempt from CCC certification. When time is of the essence, as it is in a service supply chain, it makes sense to work with a partner like Flash Global, a company that has the expertise to manage this complexity.