In light of the terror attack in France earlier this month, the Brazilian government is tightening up Rio Olympics security just as the Summer Games are about to begin in in Rio de Janeiro — and that could lead to major disruption for global supply chains operating in that area, an issue for any company doing business in Brazil.

Intensified Rio Olympics security inspections conducted by local police can happen at any time, anywhere along the city’s main avenues, and some routes are subject to traffic restrictions. This increases the likelihood of delays, particularly on drive deliveries.

Government officials have launched counter terrorism exercises in the weeks after 84 people died when a man drove his truck into a huge crowd during a fireworks celebration on Bastille Day in Nice, France. Though ISIS has claimed responsibility for the attack, French Interior Minister Bernard Cazeneuve said last week that any link to the terrorist organization “has yet to be established.”

Interim president Michel Temer, who took office in May when President Dilma Rousseff was suspended as she awaits an impeachment trial, recently launched a thorough review of the country’s security measures for the Olympics, which start Aug. 3 in Rio. 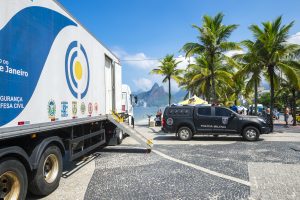 “Who in France imagined that a truck could become the weapon it became?” Gen. Sergio Etchegoyen, Brazil’s minister if institutional security, asked reporters in the aftermath of the Nice attack. “It would be a monumental irresponsibility if we did not review what we are doing.”

Already with a force of 85,000 police, military and members of a national guard-style unit roaming Rio’s streets, Temer promised during an interview on TV Globo network that that number will grow. “There will be much more security. We are very prepared.”

That level of preparation undoubtedly will continue to have ongoing implications for supply chain deliveries.

Flash Global is one of the few providers of end-to-end service supply chain solutions that is a registered importer/exporter of record in Brazil. As such, we are closely monitoring areas of restricted traffic flow and other developments that may impact deliveries to and from customers.

Visit this blog for updates on this issue.