The affable Hoffman, long a fan favorite for his charismatic style and relentless work ethic both on and off the golf course, will don the Flash logo on his shirts while competing in PGA TOUR events and other select tournaments around the world.

Aligning with one of the most recognizable figures in the world of golf will further amplify Flash’s brand on the international stage, an important step in the company’s continued evolution into a front-runner in the service supply chain world.

“People all over the world can identify with Charley, a family man who works incredibly hard, plays equally hard — just as we do at Flash,” said Sam Mikles, Flash Global President and Chief Executive Officer. “Our target audience plays golf, watches golf, follows the game week in and week out. He will be a great ambassador for Flash and we look forward to opportunities for Charley to interact with fellow members of the Flash family, our partners and community leaders — people who appreciate someone who is approachable and engaging even as he competes to succeed at the highest level.”

SUCCESS ON AND OFF THE COURSE

Hoffman, who started playing golf at the age of 7 in his hometown near San Diego, achieved success even before he turned pro in 2000. He was the first player to win two high school titles in the state of California (1994-95) and helped lead UNLV to the 1998 NCAA championship. 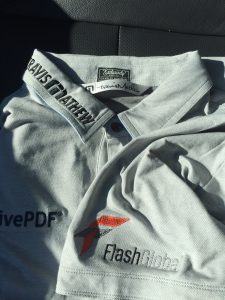 Currently in the midst of a two-year stretch in which he has played some of his finest golf, Hoffman won the Valero Texas Open in April — his fourth career PGA Tour title. Now ranked No. 48 in the world after seven top-25 finishes in 2016, he has more than $2.1 million in season earnings heading into the FedExCup Playoffs, which start this week at The Barclays tournament. Hoffman finished 10th in the final FedExCup standings in 2015, a year in which won the OHL Classic at Mayakoba and recorded a career-best seven top-10 finishes.

Hoffman’s accomplishments and ambassadorship for the game of golf has garnered much respect among his peers on the PGA TOUR. In February he was elected to a three-year term (2017-19) as co-chairman of the 16-member Player Advisory Council, a group that consults with the PGA TOUR Policy Board and Commissioner Tim Finchem on issues affecting the Tour.

NO STRANGER TO GIVING

Hoffman has a reputation for marching to his own beat, often wearing loud, colorful outfits befitting his unmistakable style. As he told Golf Digest in 2013, “I guess I do it just to sort of be different than everybody else out here. Everybody sort of looks the same. Everybody dresses the same. And I try to wear different colored shirts, and just stand out a little bit.”

The signature long-blond surfer dude locks are gone now, but the free spirit remains, along with his ample use of color. Hoffman often accessories with a distinct shade of green — whether it be a custom glove, hat or maybe even shoes — in support of Waste Management’s philanthropic efforts. He does that sort of thing for his sponsors; he’s a trusted partner.

Another of his charitable efforts hits closer to home. Hoffman and his wife, Stacy, founded the Charley Hoffman Foundation, which has helped raise $1.5 million for charities benefitting children in their native and adopted hometowns of San Diego and Las Vegas. That’s the kind of cause Flash is looking to get behind and support as well.

“That’s a win-win situation, because we here at Flash are looking to give back and offer support to outstanding causes —just as Charley and Stacy do — while advancing our business goals around the globe,” said John Miller, Chief Sales Officer of Flash.

Headquartered in New Jersey (USA), Flash Global provides the industry’s most comprehensive end-to-end suite of global service supply chain solutions that support many of the top OEMs in the world with either emerging or established technologies. Committed to a relentless pursuit of excellence, Flash offers an immense global infrastructure that enables companies to instantly scale in 140+ countries, creating consistency, predictability and visibility into their service supply chain. Flash has in-region and in-country expertise across its Global Command Centers, Global Service Centers, and immense network of global stocking and import/export locations to service our OEMs’ customer bases.