Home » Past Articles » News Alert: Will Charley Hoffman and His Old Hair Reunite?
Previous Next

Things may get a little hairy this week in the picturesque hills of Napa Valley, California, where it’s shaping up to be quite the reunion at Safeway Open. Even though Tiger Woods reneged and won’t be making his much-anticipated return to competitive golf after all, many of the PGA TOUR’s finest will be there.

Flash’s own Charley Hoffman returns to action for the first time since the FedExCup playoffs — and a long-lost, yet familiar, friend is yearning to rejoin him. That’s right, “The Hair” — his trademark California-cool, surfer-dude locks — wants to reclaim its rightful roots and roam with Charley inside the ropes once again.

This is no “chance encounter” here in wine country. The Hair has been trying to rekindle a partnership with the affable Hoffman since that fateful day in August 2013 when Charley cut the relationship at an undisclosed shop—presumably somewhere in New York. It’s a day that made headlines.

“Charley Hoffman Gets a Haircut (Why is this News?), chimed in Golf Digest.

“It was news, man,” The Hair said. “It was news because we were a team. I had been with him since before he was on the PGA TOUR. I’m talking the early days. Web.com Tour. Events like the Chitimacha Louisiana Open, the Henrico County Open, the Reese’s Cup Classic, and the Price Cutter Charity Championship.

“Travel was a grind. There were some nights we had to sleep in the car and wonder where the next meal or shower was coming from,” The Hair continued. “It was just Charley and me. I was the one who was in his ear all the time — you can do this, dude!—and I was the one who had the back of his neck, protecting him from the scorching sun. Sure, his caddie was along for the ride, but I’m the one who had Charley’s ear when it came to proper club selection. It was me who completed the killer look that became Charley’s trademark laid-back style that matched his approachable personality every bit as much as his colorful attire and accessories.”

Fans Long for the Locks 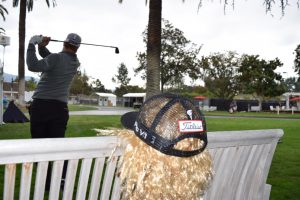 “We came a long way since those early days when we were stylin’ but not living stylish by any means,” The Hair continued. “And the fans loved us every step of the way. They still do. Look around this place (Silverado Resort and Spa). They want The Hair. Everywhere he goes, people keep asking, “Dude, where’s the hair?” … “When you gonna grow it back?”

And it’s been that way ever since Charley willingly cut the signature locks just over three years ago. People can’t stop talking about The Hair.

Even at the ultimate cathedral of golf — Augusta National — where in 2015 Charley finally opened up and talked about The Hair.

“I guess the hair’s gone, so I’m not that much different than any golfer now,” Hoffman told reporters after his second-round 68 left him just five shots back of eventual winner Jordan Spieth heading into the weekend at the Masters. “My hair stopped growing on top like it used to… So it wasn’t that great a look anymore, to be honest with you.”

That, said The Hair, cut deep all over again.

“That comment took the body right out of me; I was looking for the nearest flatiron,” The Hair said, trying keep emotions in check. “After all those years together, to hear that… that pure… betrayal… was too much. Now, I wasn’t in the room, of course, because the gatekeepers at Augusta wouldn’t let me in.  Charley had left strict orders. There were rumors he threatened a restraining order.

“See, ever since he cut ties with me in 2013 I’ve tried calling, but he won’t take my calls. I’ve tried texting; he’s blocked my number. He shut me out.”

Teeing up an Opportunity to Reunite

Charley was unavailable for comment, but sources close to him say his locks are a thing of the past and there’s no going back. The Hair, however, has other ideas.

“I want back in the game,” said The Hair. “It’s been a long journey from New York to Napa —,one that’s been years in the making — but I chose this time, this event, in this setting, to take one last shot at rekindling our bromance.

“Dude, listen. Charley needs me. The fans beg for The Hair at every single event. Well, I’m here. I’ve teed up the opportunity. Now, it’s up to Charley.”

Editor’s note: Follow this continuing saga on Twitter at @FlashGlobal and on Instagram at @therealflashglobal and @CharleyHoffman. Charley tees off Thursday at 3:50 p.m. (EDT) in a group that includes Brian Gay and Stewart Cink. Follow the action on Golf Channel (4-8 p.m.).