Our guy Charley Hoffman is ready to get the 2017 PGA TOUR season going and there’s no better place to do that in the middle of winter than at the SBS Tournament of Champions, which starts Thursday in Kapalua, Hawaii.

This is Charley’s fourth appearance at the event reserved for those who won PGA TOUR events during the previous calendar year. He qualified for this event by virtue of his one-shot victory over Patrick Reed at the Valero Texas Open last April. In that event in San Antonio, Charley shot a final round of 69 to overcome a two-shot deficit heading into Sunday.

Starting his first full season with Flash Global as a sponsor, Charley’s looking to improve on his best finish at the Tournament of Champions, a tie for 14th in 2015. He has a clear vision for what it will take to make that happen. 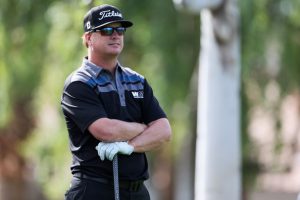 “I have to put myself into contention, obviously. I have to get to Sunday; that’s when the juices flow,” Charley said recently. “I have to hit as many greens as possible and then be a better putter. That takes the stress off. I’ve been good, but inconsistent. That needs to become a strength of my game.”

Charley Hoffman and first-round playing partner Tony Finau have a late-morning tee time (11:10 a.m. local time, 4:10 p.m. EST) on Thursday. View all first-round pairings and tee times here. The field of 32 will compete at the Plantation Course at Kapalua, a 7,452-yards, par-73 layout. At stake: $6.1 million in prize money, along with the winner getting 500 FedExCup points.

You can follow our guy Charley as he tries to get a little of that action—as well as some airtime for the Flash logo. We will provide updates on Twitter (@FlashGlobal) and Instagram (@therealflashglobal), and post blogs after each round.