Skip to content
DO DRIVERLESS VEHICLES HAVE A FUTURE IN YOUR SUPPLY CHAIN?

Dubai once again is flexing its trail-blazing muscle, this time in an attempt to unclog its overburdened roadways—and it could someday have implications for supply chain logistics.

Ruling leader Sheikh Mohammed bin Rashid Al Maktoum announced Monday that by 2030 he wants 25 percent of all vehicles traversing the city-state’s roadways to be manned by… no one. That’s right, he wants driverless vehicles to start taking over the roads as they their way past some of the world’s tallest skyscrapers. 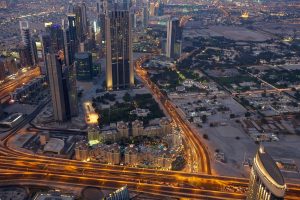 “Today, we lay down a clear strategy with specific goals for smart transportation to form one of the key drivers for achieving sustainable economy in the UAE,” Sheikh Mohammed told the state-run WAM news agency on the opening day of the second MENA (Middle East & North Africa region) Transport Congress and Exhibition, an event organized by the Roads and Transport Authority.

The leader said he hoped this joint initiative between Dubai’s Roads and Transport Authority and the Dubai Future Foundation would result in $6 billion in reduce costs and fewer traffic accidents among the 1.5 million registered vehicles in the area.

“Our strategy is not only looking at private cars, but looking at taxis, looking at buses, looking at … cable car systems,” Ahmed Bahrozyan, the CEO of the Roads and Transport Authority’s licensing agency Bahrozyan told The Associated Press.

That said, one can’t help but wonder how this push for the use of driverless vehicles might significantly impact the transport of goods and services throughout the service supply chain.

About a year ago, Freightliner — the largest heavy-duty truck manufacturer in the United States — unveiled the Inspiration Truck, the world’s first self-driving 18-wheeler licensed for road tests in Utah. This prototype is classified as a Level 3 autonomous vehicle, according to the NHTSA (National Highway Traffic Safety Administration). That means a driver must remain at the wheel whenever the vehicle is in motion, according to the agency’s regulations. Furthermore, he or she must be able to take over driving “with a sufficiently comfortable transition time.”

Martin Daum, the head of Daimler Trucks North America (Daimler is Freightliner’s parent company), said at the time of the test that tomorrow’s driver will be a “logistics manager” who oversees the automated systems, talks with dispatchers, and drives the truck in places like cities.

So, if a driver still accompanies the 18-wheeler at all times, and drives it in city traffic, the impact of long-haul deliveries in a supply chain might be negligible. However, for deliveries that can be done using smaller trucks, it’s quite possible some benefits of using driverless vehicles might reach your service supply chain.

What are some of the potential impacts driverless vehicles might have in your service supply chain? Share your views in the comments.