Despite a weather delay after two holes on the front nine, our guy Charley Hoffman got off to a fast start Friday in the second round of the Safeway Open. He carded two birdies on the front side, including one at the par-5 No. 5.

That nifty 14-foot putt, set up by deftly placed approach from 122 yards out, put him at 4 under for the tournament. However, three bogeys on the back side against a lone birdie left him in danger of missing the cut. He’s at 2 under, right at the projected cut line with the leaders still on the course. 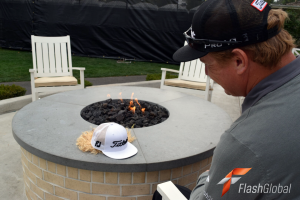 Meanwhile, The Hair — Charley’s long blond locks that have reappeared on the scene this week three years after an encounter with a stylist’s scissors — sought to take advantage of the wait to have a post-round chat with our guy.

“No time like the present to get in his ear and convince him to bring me back,” The Hair said. “The fans love me. His other sponsors would no doubt welcome a reunion. He needs me. The plan is to get him alone for a fireside chat and clear the air. He says ‘never again’… but I’m still holding out hope.”