It’s in the Hole: Charley Hoffman Comes Through in Clutch

Home » Past Articles » It’s in the Hole: Charley Hoffman Comes Through in Clutch
Previous Next

It’s in the Hole: Charley Hoffman Comes Through in Clutch

Coming to the final hole fresh off a birdie, our guy Charley Hoffman knew he had to card another to advance to the weekend at the Farmers Insurance Open in his hometown of San Diego. He did just that, recovering from an errant tee shot that landed in the rough off the tee at No. 18 and now he will play on the weekend for the first time since the Tournament of Champions earlier this month. 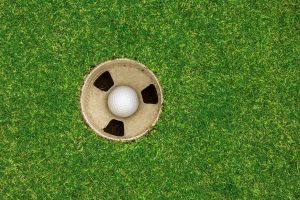 Flash Global’s favorite golfer and sponsor partner needed those two birdies to cap a round of 2-under par 70 on Friday over the South course at Torrey Pines. He finished 36 holes at even par 144, right at the projected cut line. He’s eight shots behind the leader, Justin Rose. See the complete leaderboard here.

It marked the second consecutive day Charley scored under par on the closing hole. On Thursday, he birdied the par-5 18th on the North course. That capped an up-and-down round of 2-over 74 that featured four birdies, four bogeys and a double-bogey 6 at the par-4 No. 4.

That’s why we love Charley Hoffman. He came back Friday with a steely resolve, set on making the cut. And now he rides momentum into the weekend. We in the Flash family will be looking for you and the Flash Global logo when play resumes Saturday. You can catch all the action: on live stream, on CBS (3-6 p.m EST), on Golf Channel (1-2:30 p.m. EST) and on CBS (3-6 p.m EST).