Skip to content
Doing Business in France, the World’s Most Visited Country

Doing Business in France, the World’s Most Visited Country

France is one of the most important countries in the world economy as well as in world politics. Its central location, between Spain and Belgium and bordering the English Channel, makes doing business in France ideal for trade with the entire EEC.

Not including the recently annexed islands of Martinique, Guadeloupe, French Guiana, Mayotte and Reunion, France is about 213,000 square miles, about four times the size of the state of Georgia. That makes it the 43rd largest country in the world by size, but France ranks as number five in terms of its economy.  With a population of 62,814,233 as of July 2016, France is number 22 in population size. The World Bank ranks France number 27 for ease of doing business. 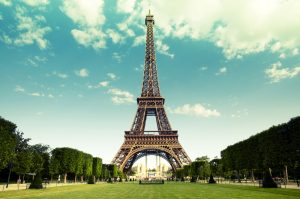 More than 50 percent of the land in France is dedicated to agriculture and another 29 percent is forest. The country enjoys cool winters and mild summers, except along the Mediterranean coast where the weather is substantially warmer all year.

Doing business in France can be quite lucrative because it is the most visited country in the world, with the third-largest income from tourism of all measured countries. Besides tourism and agriculture, France has a strong presence in machinery, chemicals, automobiles, metallurgy, aircraft, electronics and textiles. Its primary exports include machinery and transportation equipment, aircraft, plastics, chemicals, pharmaceutical products, iron and steel and beverages; primary trading partners include Germany, Spain, the U.S., Italy, the U.K. and Belgium.

The French government takes pains to ensure that doing business in France is easy for outsiders as well as French nationals, but strict labor laws have led to high unemployment — approaching 10 percent. Employment taxes are high, and standard working hours are set at 35 per week or 218 days per year, depending on the employee category. Employees are entitled to five weeks of paid leave per year, plus 11 bank holidays, religious holidays and additional time off for life events such as births and marriages. Employee unions are mandatory for companies with 11 employees or more. Employee dismissal for economic reasons is fraught with red tape.

Doing Business in France: The Positives

France has a modern and comprehensive infrastructure, with 100 mobile and 58 land line subscriptions per 100 people. The phone system is very modern, and the country makes extensive use of fiber optics for telephone and internet connections. Almost 85 percent of the population has internet access, making France the 11th most connected country in the world.

France also makes it relatively easy to set up a business. It takes only five steps that can usually be completed in under a week, although getting hooked up to electricity can take 71 days.

France has a relaxed culture, with emphasis on fine food and well-being. It is a global center for the arts, including painting, architecture, dance and fashion. The country is famous for its fine wines and cheeses, yet ranks very low on the world obesity index.

France has been a member of the World Intellectual Property Organization (WIPO) since 1974. In 2016, France was named in a respondent in fewer than 100 IP disputes, although it was a complainant in around 400.

The work force is well educated, with almost everybody completing at least 16 years of education. It is relatively easy to find and hire skilled workers, but the French employment laws make many companies reluctant to add headcount because of the high taxes and difficulty in releasing employees, even for cause or justifiable economic reasons.

Social security taxes, VAT taxes and PIT taxes add up. Income taxes can reach a high of 41 percent for incomes over $77,000. In addition to liberal paid leave policies, it is extremely difficult to terminate an employee, even for cause, and terminated employees are entitled to mandatory statutory payouts regardless of the reason for termination. Companies are also required to set up profit sharing plans for employees, and contribute to a broad-based social security plan that covers medical and disability insurance plus retirement pensions beginning at age 62.

The world watched in horror as Paris was subjected to multiple terrorist attacks during 2016. Paris is a favorite target for terrorists because of its global prominence and beloved culture. It is also easy to enter France from countries in the European Union, and its solid infrastructure makes it easy to plan attacks and get away after executing the plan. Because of this, many companies prefer to work with a local company for their supply chain and logistics needs. Flash Global has multiple partner locations in France that operate 24/7/365 to deliver critical parts and services to end users.

In fact, Flash does business in countries all over the world, from China to Brazil, from Russia to India and in Mexico and the U.S. Regardless of where your business takes you, Flash Global is there with the expertise and connections necessary to manage your supply chain. To find out how we can help, contact Flash Global today.