How the Brexit Vote Could Affect Global Supply Chains

Britons are at the polls today for the Brexit vote, a referendum on whether the United Kingdom remains a member of the European Union (EU). A majority vote to leave could have significant impact on world economies and nearly every aspect of global supply chains.

The polls opened at 2 a.m. EDT, with results expected by 3 a.m. tomorrow. An unprecedented vote to leave the EU would mean the UK would no longer benefit from free trade agreements negotiated by the European Commission, and that firms  doing business there could face customs duties and significant barriers on their exports to other EU members.

A vote to leave  “ will impact companies registered with the UK Export Authority, Business, Innovation and Skills (BIS), and export out of another EU country,” said Peter Liston, Senior Director of Global Trade Compliance at Flash Global. “IOR/EOR setups will also require some modifications.”

Companies that run global supply chains could face fluctuations in costs, labor availability and trade restrictions—all of which have the potential to greatly impact business decisions. For instance, any new barriers to trade may prompt a trend to use more local sourcing; procurement and supply chain leaders could decide to open new facilities in areas such as the U.S. and Asia — where trade deals will remain relatively unchanged if Brits vote to exit the EU — and position stock there to overcome any obstacles to the movement of goods. 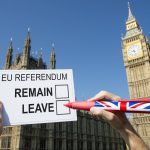 Brexit Vote Could Affect Labor, Too

A vote to leave could also have significant impact on companies that rely on supplier relations and the sharing of skilled labor across Europe. Increased difficulty in travelling across European borders could lead to labor shortages and may create administrative burdens for supply chain managers — such as dealing with increased data and documentation, new import and export taxes, and added pressure on current IT infrastructures.

If the vote is to leave, the UK would enter a two-year period of negotiations to finalize exit terms. The remaining 27 EU members likely would take a firm stance against the UK regarding trade relations as a preemptive move to discourage other members from leaving and bringing about the demise of the EU as a whole.

During these exit negotiations, international exchange rates are expected to be quite volatile. Many predict that the British Pound (aka the “Pound Sterling” or “Cable”) would likely plummet against the US Dollar and the Euro; this, in turn, would likely increase the cost of importing raw materials. In an attempt to offset increased cost, savvy supply chain leaders might turn to dual sourcing of key components as well as distributed manufacturing efforts to gain greater flexibility.

The UK would need to forge new trade agreements with EU members—and nonmembers too. Joining the European Economic Area is one option. Other options include gaining favored nation status, establishing bilateral accords and working through the World Trade Organization.

The disruption most likely will be a lengthy one— some experts predict it could take up to 10 years for the UK to agree on new trade accords with the EU and the rest of the world.

In a column written for the Irish Times, John Bruton, former EU Ambassador to the U.S. (2004-09), suggested three options for the UK if the vote is to leave the EU:

If the Brits vote to leave the EU, companies that run global supply chains can best manage the impact by ensuring their supply chains are as flexible, cost efficient and risk adverse as possible. Leveraging existing technology that provides clear visibility into the supply chain can help determine the best strategies for mitigation, as well as help reduce operating costs, boost profitability and create great efficiencies.