Skip to content
Brexit and Trade Compliance: What’s Next?

Brexit and Trade Compliance: What’s Next?

The vote has taken place regarding Brexit and trade compliance departments around the world are swinging into action. The United Kingdom’s impending departure from the European Union undoubtedly will have a tremendous impact on how global companies operate in and through that region.

Things will remain status quo in the immediate future, but a significant amount of change will take place over the next two years as terms of the divorce are finalized. Flash’s Global Trade Compliance team is already working to assess the scope of what will change and to lay the groundwork for global strategies that will help position our customers for continued success. 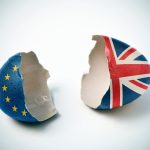 Much of this change will have legal and regulatory ramifications, including changes in intellectual property, data protection, employment, competition and trade law.

“There are all kinds of reciprocal changes looming based on that vote that are going to drastically change the map over there. It will change the way duties and taxes and goods and services are distributed in that region,” said Peter Liston, Flash’s Senior Director of Global Trade Compliance. “When it comes to moving goods into and out of the U.K. — from a trade compliance and tax standpoint, as well as inter-company transfers — all of these strategies have to be reworked over the next two years because everybody’s business models for doing business in England are going to change.”

Brexit and Trade Compliance: This Much We Know

Alan Greenspan, former Federal Reserve Chair, said Friday on CNBC’s “Squawk on the Street” that the U.K.’s Brexit vote to leave the EU “is just the tip of the iceberg.”

In all likelihood, the EU will play hardball in negotiations with the U.K. in an attempt to dissuade remaining members from following suit.  But that may create a breakup of another sort.

In a referendum Thursday, Scotland voted 62 percent to 38 percent to remain in the EU, and some political leaders there say they might press for an independence referendum that would free the nation from the U.K. If Scotland were to leave, the future of the U.K. might well be in peril. Northern Ireland and Wales could soon follow, all of which would merely add to turmoil of the business landscape not only in that region but on the global stage as well.

To say the least, things are volatile and changing by the day. Continue to check our blog to stay abreast of key developments regarding Brexit and trade compliance.