How The King had a hand in Flash-Charley Hoffman Partnership

Today we pause to honor the passing of Arnold Palmer, a man whose accomplishments on the golf course were surpassed only by his trailblazing efforts in sports marketing. In fact, it’s not too much of a stretch to say the Flash Global-Charley Hoffman partnership was made possible as a result of Arnie’s groundbreaking efforts some 50 years ago. 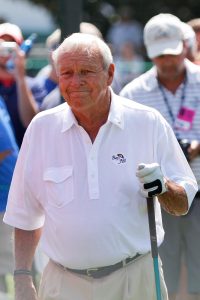 You see, many consider Arnie — not Michael Jordan — to be the father of modern sports marketing. It was Palmer who was among the first to trademark his name, in 1968. Few realized it then, but Arnie was paving the way for other golfers such as Charley Hoffman and athletes in all sports to become ambassadors for businesses all around the world.

Arnie’s Army and a Wealth of Opportunity

Arnie came into his prime just as television was beginning to discover that Arnie’s Army of followers tuned in faithfully whenever their hero was playing — and that meant a virtually untapped ocean of marketing opportunity across almost all industry verticals.

With his voice of trust, dashing good looks, and suave confidence, Arnie was the perfect fit for just about any product or service. From airlines to tractors, from cigarettes to apparel, from life and auto insurance to hotel chains and more — chances are, if you turned on TV or picked up a magazine, you’d see Arnie’s reassuring smile and you just knew you could trust what he was saying about the product de jour.

People identified with The King, as Palmer came to be called. And why not? He was one of us. He was Errol Flynn with a driver in his hands. The original grip-it-and-rip-it man, playing with a distinct, swashbuckling style and damn-the-bunkers, full speed ahead mentality that belied his unassuming and approachable demeanor off the course. He was real. He was sincere. And Arnie’s Army ate it up. So did Madison Avenue and board rooms all around the world.

There’s no denying Arnold Palmer was one of the greatest golfers of all time. He won 92 events worldwide, including seven majors, and nearly $7 million in career earnings. As impressive as that is, he was even more successful off the course, earning nearly 50 times that amount in endorsements.

And his name was a draw right up until the time of his death on Sunday at the age of 87. Sales of the “Arnold Palmer” drink, an iced tea/lemonade concoction he has been associated with since the 1960s, topped $200 million in 2015.

A toast to Arnie, Charley Hoffman

Today, when athletes turn pro, they — or their agents — trademark their name, thanks in large part to the groundbreaking relationships Palmer helped forge over the past 50-plus years. It’s common for current PGA TOUR players to adorn the logos of several sponsors on their apparel and gear.

Flash Global entered the world of sports marketing this year through a partnership with Charley Hoffman. Like Arnie, Charley’s a family man whose approachable personality makes him a fan favorite. He’s a man of integrity and a voice of truth, which is why we’re proud to have him representing the Flash family.

So we’re going to drink a few cold Arnold Palmers in honor of The King and the fact that he, in many ways, helped bring Flash and Charley Hoffman together.