Our guy Charley Hoffman opened the 2016-17 PGA TOUR season by firing a 3-under-par 69 at the Safeway Open in Napa, California. He sits 7 shots behind the leader, Scott Piercy. Here is the complete leaderboard.

Charley opened on the back side and carded a birdie and eight solid pars. He then carded three consecutive birdies and a par sandwiched between bogeys on both of the par-3s on the front side. After a perfectly positioned 305-yard drive on the par-5 ninth finishing hole, Charley hit his second shot just past the green. He got up-and-down from 45 yards out for his fifth birdie of the day. 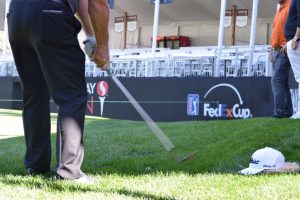 All of this transpired as The Hair, the signature locks Charlie cut off in 2013, was seen roaming the grounds looking to reunite with Charley. And while that hasn’t happened just yet, The Hair is taking some credit for Charley’s closing birdie.

“We’ve talked some this week and I gave Charley tips as he practiced chipping,” The Hair said. “Obviously he listened. That chip from 45 yards out to within 9 feet of the hole was a thing of beauty. And of course he drained the putt.”

Will Charley Hoffman and The Hair reunite? Follow this continuing saga on Twitter at @FlashGlobal and on Instagram at @therealflashglobal and @CharleyHoffman. Charley tees off Friday at 11 a.m. (EDT) in a group that includes Mark Anderson and Stewart Cink. Follow the action on Golf Channel (4-8 p.m.).