To say our man Charley Hoffman is a golfer on a mission is indeed an understatement. He no doubt has Georgia on his mind, but knows he must first take care of business this week at the BMW Championship or his quest for a TOUR Championship title ends. 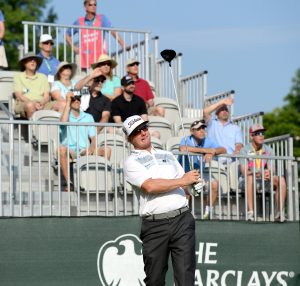 cut last week at the Deutsche Bank Championship, Charley enters the third leg of the FedExCup Playoffs ranked No. 36 in points — about middle of the pack among the top 70 who advanced. His goal is simple: Play his way into the top 30 who will move on to the TOUR Championship by Coca-Cola, scheduled Sept. 22-25 in Atlanta.

Charley finished tied for 54th at the BMW that year, 19 shots behind McIlroy. He’ll have to do better than that this week to advance to the TOUR Championship.

With a victory at the BMW, Charley would collect not only the cool $1.53 million winner’s share but also 2,000 more points—more than enough to punch his ticket to Atlanta. Finishing in the top 10 (minimum 300 points) or top 20 (at least 204 points) might do the trick as well. It depends on how the other 69 golfers in the BMW field do as well. View the entire point distribution breakdown.

Charley tees off Thursday morning at 10:47 a.m. EDT along with playing partners Piercy and Branden Grace. You can follow the action online at PGA Tour Live from 10 a.m. to 7 p.m. Golf Channel coverage begins at 3 p.m.