8 Things to Know About Doing Business in Germany

Germany is the fifth largest economy in the world and by far the largest economy in Europe, making doing business in Germany an attractive proposition. The country is about 138,000 square miles in size, making it about three times the size of Pennsylvania. Germany is part of the European Union, allowing easy movement of goods across borders. Its population was slightly over 81 million in 2015, putting it at No. 19 in the world. Germany ranks third for the age of its population, with a median age of 46.5 years.

Much of the industrial activity in Germany is centered around Ruhr, Cologne, Dusseldorf, Frankfurt, Wiesbaden and, of course, Berlin. Germany’s primary exports include motor vehicles, machinery and equipment, chemicals, computer and optical products and pharmaceuticals.

Doing Business in Germany: The Positives

The German population is highly educated, with the median population enjoying 17 years of schooling. In addition to literacy, the workforce has excellent manufacturing skills, with more than 24 percent of the population involved in industry. However, it can be hard to find skilled labor despite the fact that Germany suffers from high unemployment.

The German workforce is clustered in a few key industries. The automotive industry workforce numbers around 825,000; Med tech and pharma employ around 237,000. The balance of Germany’s industrial workforce is spread across energy, consumer goods, food and beverage, and technology and communications equipment.

Open to Imports and Exports 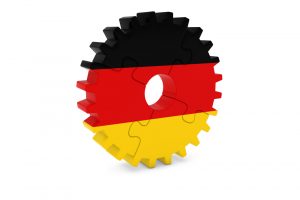 The primary trading partners for Germany are the Netherlands, France, China, Belgium, Italy, Poland and the U.S. This high volume of trade makes doing business in Germany an attractive goal for many organizations.

Germany has a president, elected every five years by the federal Parliament and delegates. The country abides by most international laws and accepts ICJ (International Court of Justice) jurisdiction. Germany also shows strong respect for IP. Most companies would find the German legal system fair but complicated and very strict.

Germany has one of the most technically advanced telephone systems in the world using a great deal of fiber optic technology. More than 50 percent of inhabitants have a land line, and there are more mobile lines than there are inhabitants. In addition, there are abundant television and radio outlets, and almost 90 percent of the population has access to the internet.

Transportation and logistics are also world class. Germany has more than 300 airports with paved runways, 23 heliports, 27,000 miles of standard gauge railway, 4,600 of waterways and 400,000 miles of paved roadways.

The infrastructure is there to support doing business in Germany. The major issues are dealing with the complex hodgepodge of local regulations and bureaucracy.

The German economy has been stagnating for several years due to a low level of investment. The government has created several programs designed to spur the economy, but so far the results have been negligible.

Workers are covered by some of the strongest protections in the world. The government recently increased the minimum wage to $11.75 per hour, and there are strict rules preventing dismissal of employees. Most employment agreements are written and include details about most aspects of the engagement, including holidays and benefits. For example, German workers are protected from working more than eight hours per day. If an employee agrees to work longer, the worker must be given compensatory time off during the four-week period so that the average time per day is not exceeded. Except in service roles, employees are prohibited from working on holidays.

The country’s unemployment rate hovers around 4 or 5 percent. This is the 49th lowest rate of the measured countries, but that is only part of the picture. Workers complain they cannot get hired and companies are reluctant to hire because of the difficulty in dismissing employees once they are hired. More than 15 percent of the population of Germany lives below the poverty level.

Every business entity in the country must register with the local trade registry court for its principal place of business. If the entity also has a presence in other towns, the company may need to register each location independently depending on the degree of autonomy the local sites have. There is no central registry, and the requirements of each locality differ.

The central government has defined a code of conduct for businesses, but the code does not have the force of law. Companies are free to follow it or not, but they are required to disclose any deviations in their dealings.

As part of the reaction to the recent financial crisis, the government enacted laws regulating the compensation for corporate executives and board members, in an attempt to ensure that compensation is in line with overall company performance and adding the possibility for personal liability to instances of poor judgement or performance that affect company results. Companies are required to file quarterly financial statements in a rigidly defined XBRL format.

In addition to registration and corporate oversight, German laws covering product liability and environmental or consumer protections are complex and extensive. Although some of Germany’s protections are taken verbatim for the equivalent EU directive, in many cases the German version is much more restrictive. Obeying the laws often requires local familiarity to ensure compliance.

Doing business in Germany seems simple on the surface, but there are many hidden complexities. It makes sense to work with an experienced, knowledgeable team that knows the local landscape. Flash Global has the skills necessary to help you make the most of doing business in Germany, as well as most other countries in the world. Contact us today to learn more.