6 Things to Know About Doing Business in Japan

Doing business in Japan can be lucrative, but it often presents challenges to outsiders. Japan is the fourth largest economy in the world after the U.S., China and India. Its population reached 126,702,133 in July 2016, putting it at No. 11 in terms of population size. It ranks at No. 34 for ease of doing business, according to World Bank Group. Many companies find it essential to have local help and representation because of the country’s relationship-centered business climate, which makes it difficult for outsiders to break in.

Japan is a chain of islands in Eastern Asia, with a total land mass of about 140,000 square miles. Made up of 6,852 islands, Japan has over 18,000 miles of coastline and is just a little smaller than the state of California in size. Honshu, Hokkaido, Kyushu and Shikoku are the four largest islands, making up about 97 percent of the total land mass. Slightly more than 93 percent of the population lives in urban areas, primarily clustered in Tokyo, Osaka, Kobe, Nagoya and a few other major cities.

Japan does not enjoy an abundance of natural resources, so it relies heavily on imports of petroleum, coal and natural gas for energy. The country’s reliance on fossil fuels has led to environmental issues including smog, pollution and acid rain, which led Japan to seek alternative energy sources in nuclear, solar and wind.

Doing Business in Japan: The Positives 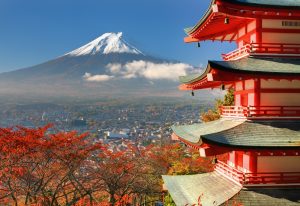 Japanese consumers are early adopters with a thirst for high-end electronics and luxury goods. Japan’s strong consumer market makes it an ideal location for test marketing new products as well as providing a strong market for established brands. Unemployment is relatively low, hovering near 3.5 percent, and consumers have relatively high levels of disposable income.

Japan ranks No. 3 globally for total R&D investment, with a total annual outlay for R&D of around $147 billion. Twenty of the top R&D investor companies in the world are based in Japan, and the country has a high respect for intellectual property rights. In 2014, Japan accounted for almost 20 percent of the world patent filings.

Residents of Japan have 125 wireless phones and 50 wired lines per 100 people, and more than 93 percent of the population has internet access. The Japanese people have a choice of broadcast media, with cable, satellite and OTA providing both domestic and international coverage.

Power is readily available, although it can take an average of 105 days and multiple steps for a new business connection.

Japanese etiquette has strict protocols for many aspects of day-to-day business, covering everything from the correct way to handle business cards to where and how to put wasabi on your plate at meals. Even Japanese toilets can be confounding for foreigners, and it is easy to give offense without meaning to. The Japanese business community is tightly knit and built on relationships, so it is important to observe the cultural norms.

While starting a business can be relatively simple, other aspects of doing business in Japan may not be as easy. Obtaining construction permits, for example, takes on average 197 days and requires at least 12 steps. Japan’s tax structures are complex and differ markedly from those of most other countries. Managing local taxes can take around 330 hours, requires 14 different payments and can add up to more than 50 percent of net profits.

While most Japanese people understand English, most do not speak it well unless they have regular contact with English speakers. However, Japanese etiquette prevents people from admitting they don’t understand the conversation, which can make communication difficult. It is best to speak in simple terms and offer business materials in writing since most people understand writing better than conversation. Be careful of putting anything in writing that could be construed as a commitment, however, since the Japanese may consider even simple statements as binding agreements that will stay in effect forever.

Japan’s business structure is built on close relationships between companies that may go back for generations. Foreigners sometimes have a meeting with Japanese business people which seems to go well, with many “yeses” heard. However, saying yes is often merely a courtesy to avoid seeming rude or because the meeting participants do not wish to admit they don’t understand the conversation. It is unlikely that a new entrant to doing business in Japan will close a deal after one—or even several—meetings.

In addition, when doing business in Japan, most companies prefer local businesses to those at a distance. Ideally, they like their partners and suppliers to be within two hours of their facilities. That makes it imperative to have a local presence within all the major business districts, so many companies rely on a supply chain service partner to help. Flash Global has more than 100 locations in Japan, making us the only supply chain service company doing business in Japan that can deliver to any location in the country in 90 minutes or less.

In fact, we do business in countries all over the world, from China to Brazil, from Russia to India and in Mexico and the U.S. Regardless of where your business takes you, Flash Global is there with the expertise and connections necessary to manage your supply chain. To find out how we can help, contact Flash Global today.